This may be a bit too much... Alex Scott, a former pro-footballer and presenter, has taken to social media to share a series of candid posts about.. 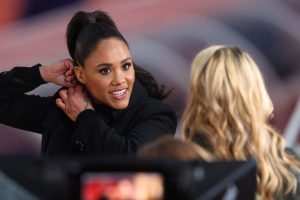 Alex Scott, a former pro-footballer and presenter, has taken to social media to share a series of candid posts about her health.

She’s currently in Portugal on a week-long wellness retreat called the Juice Master Retreat, where you spend seven days in the mountains hiking, swimming, and meditating.

Hosted year-round by celebrity-favourtie Jason Vale, Juicy Retreats have been running since 2005.

Scott – who is 37-years-old – shared a few idyllic-looking images on her Instagram stories teasing her holiday destination.

Showing hiking trails, a poolside yoga class and her and a friend working on her laptop in the sunshine, she shared her gratitude for such a picturesque working spot.

Speaking to her 1.2 million followers on Instagram, Scott said: “This may be a bit too much, TMI, but I am off for a colonic.”

When Scott refers to a “colonic”, she’s referencing a colonic irrigation procedure where a medical professional inserts a device to send water into your colon to flush out your large intestine.

In doing so, you’re thought to remove toxins from your system, boost energy levels, and enhancing your immune system, although as an alternative therapy, more conclusive evidence on its benefits are needed.

It’s not the most common procedure, but other celebrities who are thought to get them include Gwyneth Paltrow, Britney Spears and Paris Hilton.

We’ve no doubt she includes other health and wellness treatments as part of her routine – she is an ex-Arsenal footballer, after all, and has made a grand total of 140 appearances for the England team in her time.

She’s spoken candidly about her mental health previously, too. Appearing as the Women’s Health cover star in October, she described how trolling on social media, at the height of her success, seriously impacted her mental health.

Alex said in October: “When I retired [and was] getting trolled, I found that I was turning to drink to try and hide everything, hide what I was feeling.”

She ended up seeking therapy and mental health help for her issues. If you’re going through the same, do know that help is out there – Mind charity is a great place to start.

The post Alex Scott just shared the rather unique health treatment that she gets regularly appeared first on Marie Claire.

Read More
Did you miss our previous article...
https://lifestyle.delivery/fashion/are-you-ready-to-have-an-orgasm-the-modern-guide-to-sex-will-show-you-how
socialmediabittoomuch