An interracial friendship is a lesson: "We intentionally allow each other's voices to be heard"

Kimberly Jones and Gilly Segal have been best friends for over a decade, and have learnt how to support one another as their respective communities..

Kimberly Jones and Gilly Segal have been best friends for over a decade, and have learnt how to support one another as their respective communities have come under attack. 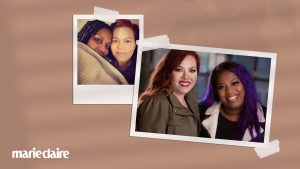 The core of our friendship, which happens to be interracial, is that we don’t enter one another’s lives as teacher standing at a podium. We take a seat in that space as student. The first thing we did was learn about one another, and it started with the very personal.

For us, it all began with books. We were in the same book club, which meant meeting regularly to talk about a topic we both love. That evolved into book club dinners where we talked about other things. Life things.

The pivotal moment for us came on a writing retreat. On the surface, it might not seem that we have much in common. But we do. In between writing sessions, we learned that not only are we both book nerds, but we’re also both single mothers, both divorced from professional athletes, and both balancing day jobs with dreams of creative side hustles.

Moreover, we discovered that we make each other laugh. A lot. We share a bent toward irreverent humour and can predict with 99% accuracy exactly what will make the other laugh until she cries. Our sense of what we like is even more accurate than TikTok’s scary-good algorithm, and we find a lot of those moments on TikTok, these days. 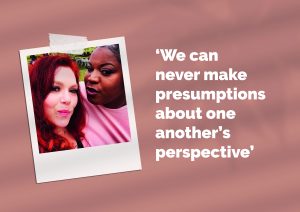 Speaking of social media, we’ve both found ourselves falling prey to the phenomenon of calling someone a friend when they’re really an acquaintance. But the real defining feature of our friendship is its intimacy. We have lived together, not just through the social media highlight reel – but also the real life low lights. We’ve cried on one another’s shoulder during romantic breakups and cheered together over our kids’ triumphs. We’ve cared for one another through illness. Each of our families has claimed the other as their own. In fact, some days, we’re certain each of our biological sisters would happily swap us out for the other.

None of that describes much that’s unique to the fact that we’re an interracial friendship. But of course, we are. Kim is Black and Gilly is white and Jewish. And we both understood from the very start that we can never make presumptions about one another’s perspective. We ask. We make space for each other. We earned our trust in each other.

We took our time building the friendship. Cultivating it, if you will, like a greenhouse garden. It’s beautiful, but it’s not without effort. The beauty is that now, nearly a decade into it, we live as our full selves around one another.

I guess you could say we always knew the cookout and Shabbat dinner required an invitation. 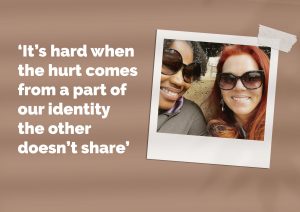 We’re often asked whether, as co-authors, we argue. We’d love to offer up a salacious story – we do love to be the drama! – but the truth is the difficulties in navigating our friendship have come mostly from the moments when the door to our carefully-managed hothouse garden has been thrown open, allowing the elements – the outside world – in. For example, the shooting at the Tree of Life synagogue in Pittsburgh, the epidemic of police brutality, voter suppression efforts in our home state. We could fill an entire article with examples.

True friendship means navigating those things together. Our biggest tests have come less from things we’ve said to one another than from how we’ve supported one another – or failed to do so – when our communities are under attack. It’s hard to know what to say – even to a friend – when they’re hurting so badly. We have a frame of reference for supporting one another through difficulties we have in common. It’s harder when the hurt comes from a part of our identity the other doesn’t share.

But difficulty is no excuse for not trying.

We tried to show some of the ups and downs of these efforts in the friendship between our characters in our book, Why We Fly. There’s a lot of us in Leni and Nelly’s friendship (before they fall out): the admiration they have for one another, the way they hype each other up. But they struggle to support one another through the external pressure – like Leni’s burgeoning relationship with the quarterback, and the fallout from taking a knee during the national anthem. Each girl tries to speak and teach, when she should have listened and learned.

We consistently ask ourselves that question. Is this a moment for me to speak? Or is this a moment for me to listen? When I do speak, whose voice am I amplifying – my own or my partner’s and through her, the community to which I’m attempting to be an ally? We don’t often think about our relationship as an interracial friendship, but we do intentionally make space for each of our voices, as a Black woman and a Jewish woman – on the pages we write together, in our friendship and in the way we engage with the world.

We hope the story of our friendship – and the friendship stories we write – offer a model for others to do the same.

Kimberly Jones & Gilly Segal’s YA novel, Why We Fly, is out now. 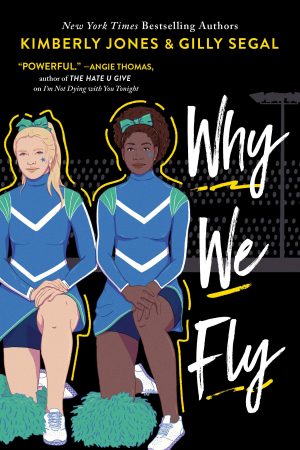 The post Lessons from an interracial friendship: “We intentionally make space for each of our voices” appeared first on Marie Claire.

By: Kimberly Jones & Gilly Segal
Title: Lessons from an interracial friendship: “We intentionally make space for each of our voices”
Sourced From: www.marieclaire.co.uk/reports/interracial-friendship-751882
Published Date: Fri, 15 Oct 2021 10:31:57 +0000

Read More
Did you miss our previous article...
https://lifestyle.delivery/fashion/halloween-idea-for-harry-potter-and-ron-weasley
thefirstkimberlyjones