Britney Spears is reported to have been engaged one year ago, but she remained silent due to conservatorship

HOLLYWOOD, CALIFORNIA - JULY 22: Britney Spears attends Sony Pictures' Once Upon a Time ... in Hollywood Los Angeles Premiere on July 22, 2019 in.. 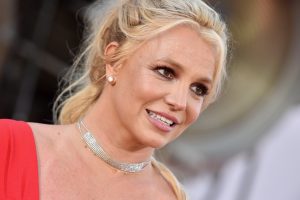 Britney Spears announced she was engaged to fiancé Sam Asghari in September 2021, but it has since been reported the couple have been engaged for much longer than they let on.

It is said Sam, 27, popped the question at Christmas in 2020 – four years after they met on set of the Slumber Party music video – but they couple had to keep it a secret until the end of the conservatorship, which was lead by Britney’s father Jamie Spears.

A source close to the 40-year-old singer, told The Sun: “Britney told a friend that she actually got engaged to Sam during Christmas the year before last.

“She said she had kept it on the down low and only two people knew that they were planning on getting married that far back.

“Britney told the friend that one of the diamonds fell out of her engagement ring and Sam let her know he was going to replace it.”

“So when the stories about an engagement ring came out, she claimed it was really nothing new to her.”

The Toxic hitmaker reportedly remained tight lipped about the next step in their relationship, and urged the close friends she had told to do the same.

The insider added: “Britney said very few people knew because she can’t tell everybody everything.”

Britney – who has sons Jayden, 15 and Sean, 16, with ex Kevin Federline – is believed to have delayed sharing the news of her engagement until the conservatorship had ended, because she was not allowed to get married or have another child under the legal order.

Speaking remotely at Los Angeles’ Court back in June, Britney told Judge Brenda Penny: “I have an [IUD] inside of me right now, so I don’t get pregnant.

“I wanted to take the [IUD] out so I could start trying to have another baby, but this so-called team won’t let me go to the doctor to take it out because they don’t want me to have children.”

However, it has since been reported Britney and Sam would like to expand their family, and overhauling their lifestyle in preparation for the next stage in their relationship.

A source told heat magazine: “Britney is in awe of how disciplined and smart he is on this subject, and it’s really rubbed off on her in terms of making better choices and taking far greater care of herself.

“Britney’s saying she’s all in and ready to make the switch, but only time will tell if she follows through and can keep up with Sam’s routine.”

The post Britney Spears reportedly got engaged a year ago - but stayed silent because of conservatorship appeared first on Marie Claire.

By: Maisie Bovingdon
Title: Britney Spears reportedly got engaged a year ago - but stayed silent because of conservatorship
Sourced From: www.marieclaire.co.uk/news/celebrity-news/britney-spears-engaged-conservatorship-secret-764645
Published Date: Sat, 05 Feb 2022 13:34:05 +0000