Here are the reasons Harry and Meghan might not release photos of baby Lilibet publicly.

Prince Harry and Meghan Markle are determined to do things their way.After stepping down from their roles as senior working royals and swapping.. 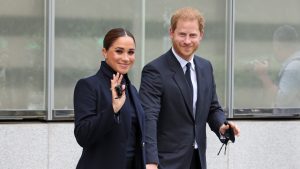 Prince Harry and Meghan Markle are determined to do things their way.

After stepping down from their roles as senior working royals and swapping Frogmore Cottage for sun-soaked Montecito, the couple have been exploring different ways to use their celebrity for the good of others – from launching their global nonprofit, Archewell Foundation, to their recent appearance at Global Citizen Live.

So it doesn’t come as a surprise that when it comes to parenting, the couple are breaking from royal protocol in just about every way imaginable, too.

Usually, the public get to glimpse royal babies just hours after they’re born, with Prince William and Kate Middleton appearing with all three of their children on the Lindo Wing steps, just as Prince Charles and Princess Diana did before them.

But despite being born in June, the Sussexes are yet to release any photographs of baby Lilibet, or release any updates on their firstborn, Archie – which, experts predict, is one of the primary reasons they decided to step away from the royal spotlight in the first place.

“As the littlest Sussexes get older they face the inevitable hounding by an intrusive paparazzi—photographers jumping out from behind bushes and parked cars and all that,” royal expert Christopher Anderson, author of the 2001 book Diana’s Boys, told The Daily Beast recently.

“I’m sure Harry especially wants to shield them from that trauma as long as humanly possible, so that his children can have something akin to the proverbial ‘normal’ childhood.”

It’s a balance Prince William and Kate Middleton have also been trying to achieve, releasing occasional photographs of their children for birthdays and Christmases, but otherwise keeping Prince George, Princess Charlotte and Prince Louis largely out of the public eye.

But Harry and Meghan’s privacy plan is somewhat more stringent, with the couple even resorting to suing a photo agency that used a drone to capture pictures of Archie taking a walk with Meghan’s mother Doria Ragland last year.

The Daily Beast also spoke to “veteran paparazzo” Giles Harrison, who said that Harry and Meghan’s strict commitment to their two children’s privacy has left many photographers unwilling to take the legal risk.

“If you get the pictures of them, they are gonna try and sue you no matter what happens, no matter where you were,” he told the publication. “And they can afford to sue you a lot more than you can afford to defend yourself.”

So chances are, until Archie and Lilibet reach an age at which they can decide for themselves, Harry and Meghan will continue to guard their privacy as much as possible.

The post Here's why Harry and Meghan may never publicly release photos of baby Lilibet appeared first on Marie Claire.