When the Duke and Duchess of Cambridge got married on 29th April 2011, making it the first modern royal wedding in decades, they broke tradition in.. 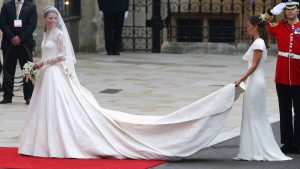 When the Duke and Duchess of Cambridge got married on 29th April 2011, making it the first modern royal wedding in decades, they broke tradition in several subtle ways, from their wedding night to Kate choosing to wear her hair down (this hadn’t been done in 350 years!).

The bride even did her own makeup instead of getting the professionals in, reportedly because she wanted Prince William to recognise her as she walked down the aisle.

And her glam wasn’t the only tradition she modernised. Of course, we all know of Kate Middleton’s wedding dress, which in itself mixed historical and present day elements.

Uncharacteristically, the bride chose to dress her sister, Pippa Middleton, in an ivory dress to match hers, which is usually a big no no, since you could confuse the bridesmaid with the bride.

Pippa’s dress, also designed by Sarah Burton, matched Kate’s in colour and featured similar lace on the neckline and buttons down the back.

It was however more fitted, where Kate’s was flared, and featured a cowl neckline. We can all agree the overall effect looked beautiful and unexpected.

The Duchess of Cambridge also dressed her flower girls in ivory dresses with puff sleeves and full skirts.

Read More
Did you miss our previous article...
https://lifestyle.delivery/fashion/this-rare-royal-privilege-was-granted-to-meghan-markle-and-edoardo-maglio-mozzi
duchessofcambridgegotmarried