Credit: Pool / Max Mumby / GettyPrince Charles may be planning to live in a “flat above a shop” when he becomes King, as part of plans to cut down.. 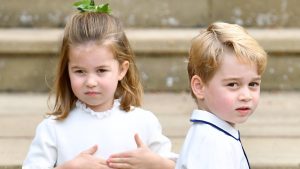 Prince Charles may be planning to live in a “flat above a shop” when he becomes King, as part of plans to cut down the Royal estate and make it more accessible to the public, but he’s reserving a very special part of Balmoral for his eldest grandson, Prince George.

Appearing on BBC’s The One Show, Charles, who is next in line to the throne, revealed that he has honoured eight-year-old George in just about the most royal way possible – and it’s all to do with one of his favourite gardens on the 50,000 acre Balmoral Estate.

Explaining how the name for his autumn garden, or as the royal puts it an “old man’s obsession”, came about, he explained, “This was a rather empty field that the farm didn’t need anymore. The great thing was that I managed to plant it the same year that my grandson was born, the eldest, George, so I thought I’d call it Prince George’s wood.”

Giving the programme a tour around his beloved garden, the prince added: “It is really for autumn colour and a bit of spring. But autumn is the magic up here. So finding all the interesting trees and shrubs that turn an interesting colour is half the battle.”

It was previously reported that Prince Charles has plans to make some pretty significant changes to the royal estate when he succeeds to the throne, including redistributing some of the property he had previously intended to gift Prince Harry and Meghan Markle, to the Cambridge children; with a royal insider saying that giving the property to Harry and Meghan is “no longer on the cards” after they stepped down from their royal roles.

During the interview, the prince also opened up about the lifestyle changes he has made in acknowledgement of the climate crisis, revealing, “I don’t eat meat and fish on two days a week and I don’t eat dairy products on one day a week. If more [people] did that, you would reduce a lot of the pressure.”

Apparently, the royal has also converted his 50-year-old Aston Martin car to run on what he described as “surplus English white wine and whey from the cheese process”.

Charles was speaking just weeks ahead of the COP26 Summit – AKA the United Nations Climate Change Conference – which is taking place in Glasgow next month, and will see world leaders come together to discuss how to put a stop to climate change.

Charles is expected to be in attendance at the conference, as is the Queen and Prince William, whose newly-coined Earthshot Prize is awarding 15 climate innovators for their efforts and inventions when it comes to tackling the never more pressing issue.

The post Prince Charles named one of his favourite areas of Balmoral after Prince George appeared first on Marie Claire.

Read More
Did you miss our previous article...
https://lifestyle.delivery/fashion/all-you-need-to-know-about-remodeling-your-house
princecharlescutdown