To avoid an unpopular Buckingham Palace guest, the Queen once hidden in a bush

And we love her even more for it...Getty ImagesThe Queen is undoubtedly the coolest monarch around – from appearing in a James Bond sketches and..

And we love her even more for it... 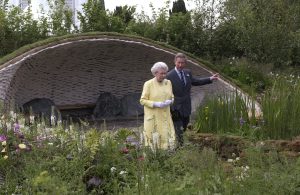 The Queen is undoubtedly the coolest monarch around – from appearing in a James Bond sketches and watching The Crown to hiding behind bushes to avoid awkward conversations with dictators and responding to the Brexit result with sarcasm.

As we celebrate her Platinum Jubilee, here are our favourite moments from Queen Liz…

When she avoided a conversation by hiding behind a bush

Taking her dogs for a walk in 1978, apparently the Queen decided hiding behind a bush would be preferable to speaking to Romanian leader Nicolae Ceausescu, who was on a state visit at the time.

We’ve all done it, but with ex-boyfriends and that annoying couple from our NCT class rather than state leaders.

When she gave this line to some American tourists

The Queen was on a walk near Balmoral – again in her headscarf – when a group of American tourists stopped her and said, ‘have you met the Queen?’ The Queen turned to her royal protection officer and said ‘I’ve never met the Queen… but this policeman has.’

When she made her acting debut with Bond

‘It was a bit of a laugh’ said the Queen about the Olympic Opening Ceremony stunt which saw her march through Buckingham Palace with Daniel Craig before a ‘parachuting’ out of a helicopter into the stadium like a boss.

When she told off Silvio Berlusconi for being noisy

In 2009, when the Queen gathered with G20 leaders for a group photo, Italian PM Silvio Berlusoni shouted ‘Mr Obama!’ at the president. ‘What is it? Why does he have to shout?’ replied the Queen, which prompted an outbreak of laughter. Get back in your box, Silvio.

When she made her point with Crown Prince Abdullah of Saudi

According to a memoir by former Saudi ambassador Sherard Cowper-Coles, when the Crown Prince Abdullah of Saudi Arabia was invited up to Balmoral for lunch with the Queen, she asked him if he’d like a tour of the estate. When a string of Landrovers pulled up outside the house the Prince was instructed to climb into the front seat of the first one, where he found the Queen (and not a chauffeur) was sitting in the driving seat. At the time women were not allowed to drive in Saudi Arabia so this was (probably) the first time he had ever been driven by a woman. When the Queen, chatting away, then accelerated speedily along the road he asked her (via his interpreter) to slow down. We really hope that made her accelerate even faster…

In 1982 a man called Michael Fagan drunkenly scaled the wall of Buckingham palace and broke into the Queen’s bedroom while she was asleep. When he pulled back the curtain of her bed she woke up and said, pretty calmly considering the circumstances, ‘what are you doing here?’ before exiting the room. ‘Her nightie was one of those Liberty prints and it was down to her knees’ Fagan later told an interviewer. An unarmed footman was eventually called, who took Fagan across the hallway and gave him a whisky while he was waiting for the police to fetch him. We’re not sure the reception would be quite so chilled out if he had broken into the White House…

When she responded to the EU Referendum with sarcasm

Supposedly during a meeting with Sinn Fein chief Martin McGuinness on a two day trip to Northern Ireland in the wake of the Brexit result, she responded to his ‘Good evening, are you well?’ with ‘Thank you very much. Well, I’m still alive, anyway.’ She continued to explain ‘We’ve been quite busy – there’s been quite a lot going on’. When he sympathised – assuming she meant Brexit – the Queen replied, ‘I’ve had two birthdays, so we’ve been quite busy’.

When she joked about her outfit at the Coronation

Her elaborate robes were so heavy that when she reached Westminster Abbey she turned to the Archbishop of Canterbury and asked him to give her a push to ‘get me started.’

When she asked Tracey Emin this question

At an exhibition in Kent she said to famous YBA Emin, ‘do you show internationally as well as Margate?’ We wonder if they then went on to discuss Emin’s famous work ‘All The People I Have Ever Slept With’

When she showed she’s a (slightly crazy) dog lover

According to former royal chef Darren McGrady, the Queen’s army of corgis are fed on (among other things) steak, poached chicken and rabbit and her morning breakfast tray also features a plate of dog biscuits. She also once demoted a footman because he poured whisky into the corgis’ water bowl.

When people mistook her for a common lady shopper

The artist Juliet Pannett – who painted the Queen – said HRH told her a story about a time she was having tea at Sandringham and they’d run of cake, so she nipped out to the local shop to buy some. As she was walking through the shop door in her headscarf an elderly lady said ‘Good heavens, you look just like the Queen’, to which she replied ‘how reassuring’ and carried on into the shop.

The post The Queen once hid in a bush to avoid a controversial Buckingham Palace guest appeared first on Marie Claire.

Read More
Did you miss our previous article...
https://lifestyle.delivery/fashion/simple-hormone-replacement-therapy-to-fight-menopause
thequeenwelove