If you'd like to approach your weight-loss efforts as a scientist would, your guiding decision-making principle should be one of simplicity. More..

If you'd like to approach your weight-loss efforts as a scientist would, your guiding decision-making principle should be one of simplicity. More often than not, the most straight-forward solutions are also ones that get us the greatest results, and this is very much the case when it comes to quick weight loss.

And what's more straight-forward than identifying your existing daily habits and giving them a small tweak to (literally) tip the scales in your favor? BJ Fogg, a behavior scientist at Stanford University and author of a new book Tiny Habits: The Small Changes That Change Everything, agrees with this approach.

"You make it so simple that it's almost like you have no excuse not to do it. So even when you're in a rush or you're sick or you're distracted, it's so tiny that you can still do it," he adds.

By slightly changing the parts of your daily routine that don't require much thought or effort, you'll avoid having to make huge changes—a plan that usually sets us up for failure. So before you sign up for a complicated diet plan or commit to an expensive personal trainer, make sure you've taken advantage of these simple, effective, and underrated ways to shed pounds. And to lose even more weight, you won't want to miss 22 Meals to Melt Belly Fat in 2022.

A striking new study published in the journal Diabetes suggests that simply blasting the air conditioner or turning down the heat in winter may help us attack belly fat while we sleep. Colder temperatures subtly enhance the effectiveness of our stores of brown fat—fat keeps you warm by helping you burn the fat stored in your belly. Participants spent a few weeks sleeping in bedrooms with varying temperatures: a neutral 75 degrees, a cool 66 degrees, and a balmy 81 degrees. After four weeks of sleeping at 66 degrees, the subjects had almost doubled their volumes of brown fat. (And yes, that means they lost belly fat.) 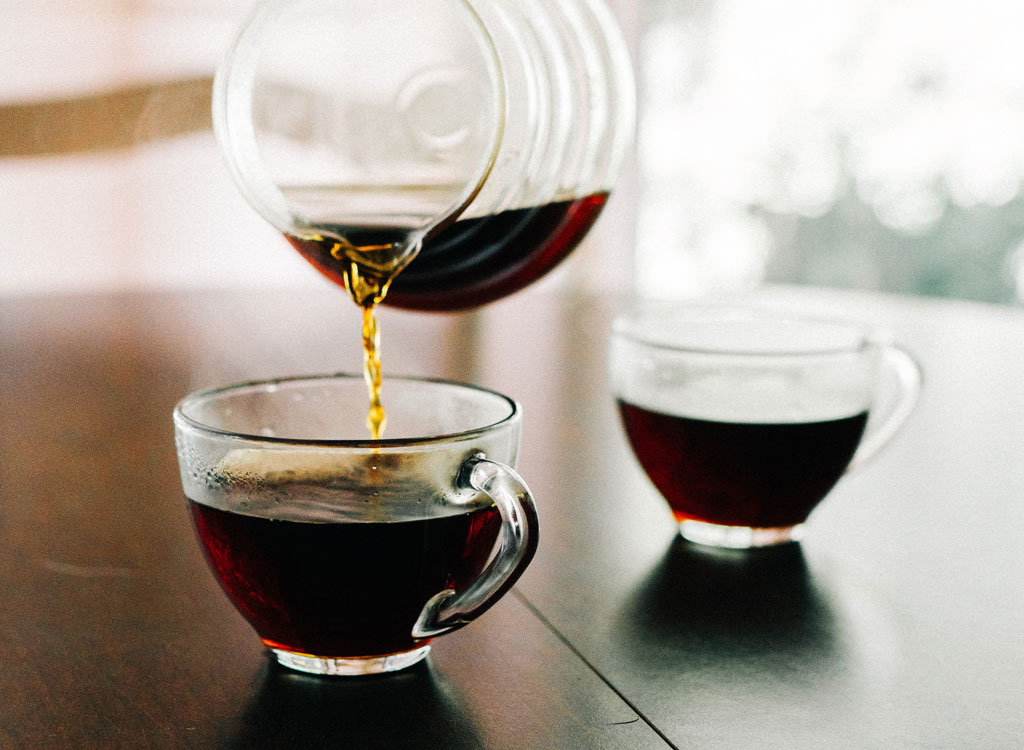 Drinking coffee may help you lose weight and lower body fat. In fact, drinking four cups of coffee daily could reduce body fat by about 4%, according to a recent study. You just have to make sure you're not using the 7 Things You Should Never Add to Your Coffee. A cup of coffee has nearly zero calories. A cup of coffee with cream and sugar has 80 calories. If you drink two cups a day, learning to take it black will save you 14 pounds in a year!

Not around your waist, but on your plate: A new report from the Credit Suisse Research Institute found that more and more of us are choosing whole-fat foods over skim, lite, fat-free, or other modern monikers of leanness. And while many health organizations like the American Heart Association still want us to cut down on fat—particularly saturated fat—this full-fat trend may be a healthy rebellion against those decades-old credos, according to recent studies. Click here to discover The 20 Best Full-Fat Foods for Weight Loss! 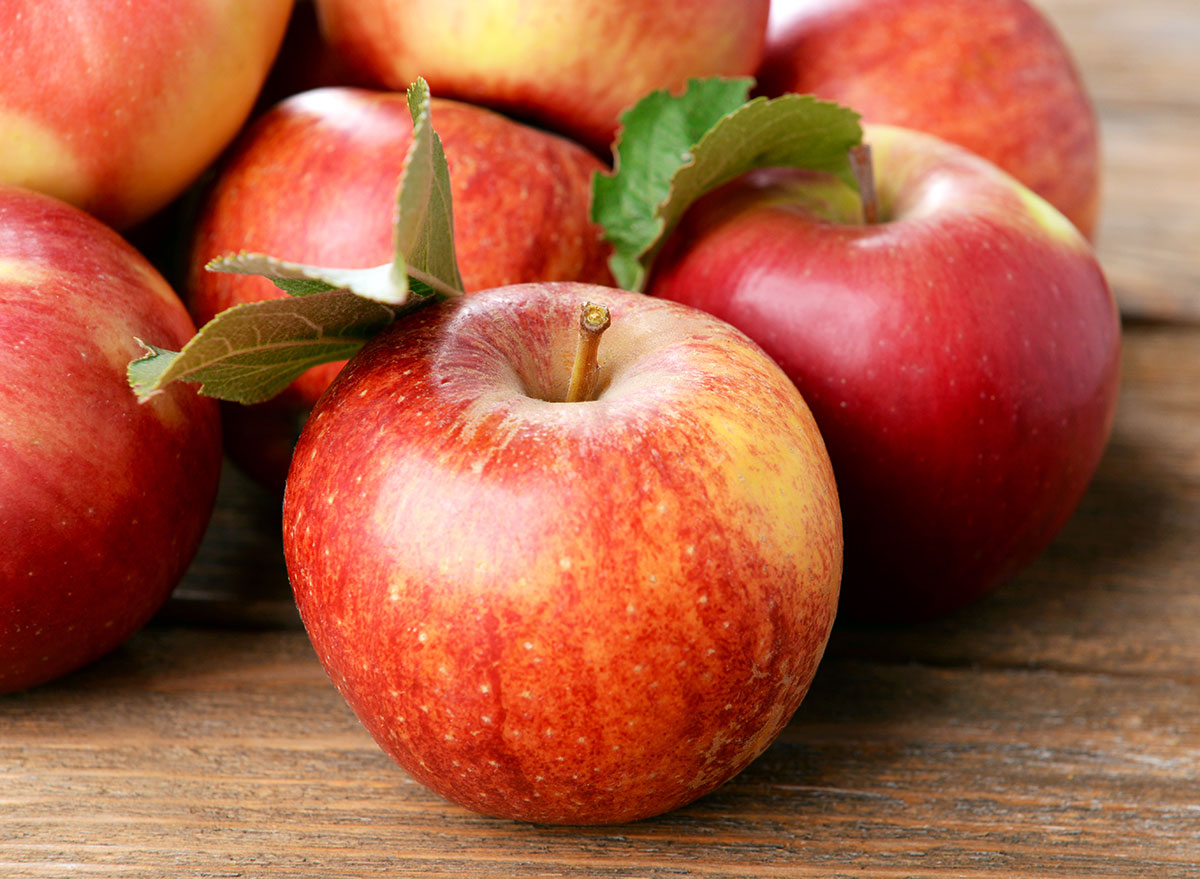 They're the best fruits for weight loss. That means Pink Lady apples, watermelon, red grapes, and raspberries. The higher levels of nutrients called flavonoids—particularly anthocyanins, compounds that give red fruits their color—calm the action of fat-storage genes. For example, research conducted at the University of Western Australia found that the Pink Lady apples had the highest levels of flavonoids, antioxidants which are thought to keep the body in tip-top condition. 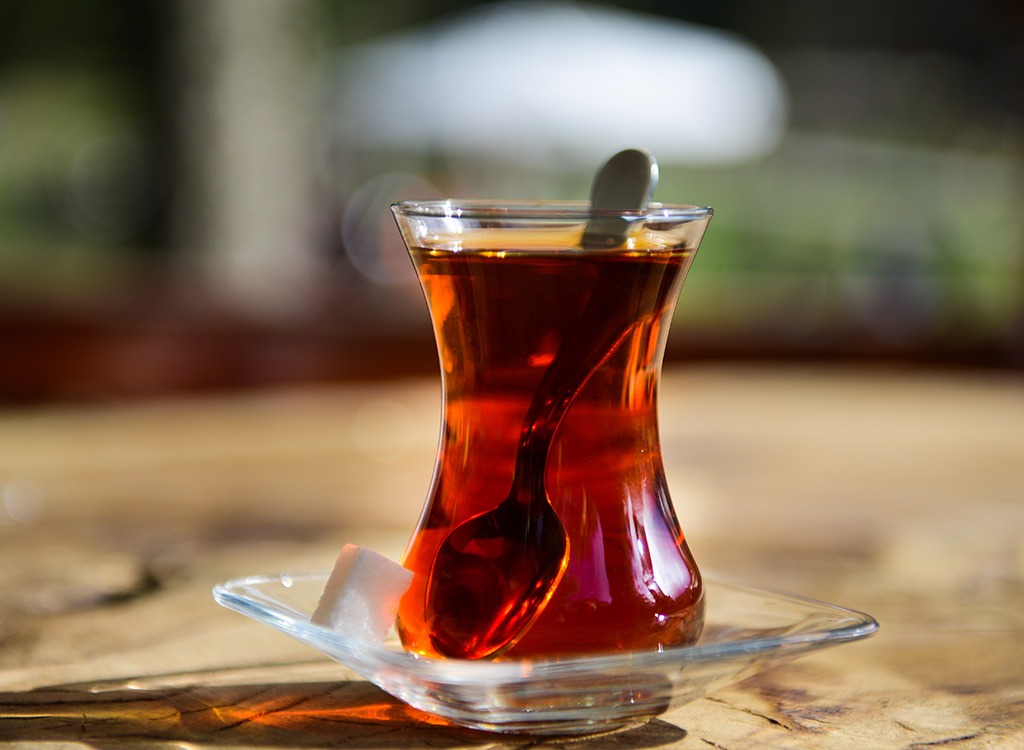 This fermented Chinese tea can literally shrink the size of your fat cells! To discover the brew's fat-crusading powers Chinese researchers divided rats into five groups and fed them varying diets over a two month period. In addition to a control group, there was a group given a high-fat diet with no tea supplementation and three additional groups that were fed a high-fat diet with varying doses of pu-erh tea extract. The researchers found that the tea significantly lowered triglyceride concentrations (potentially dangerous fat found in the blood) and belly fat in the high-fat diet groups. Although sipping the tea could have slightly different outcomes in humans, we think these findings are promising enough that it's still well worth your while to fix yourself a steaming hot cup. 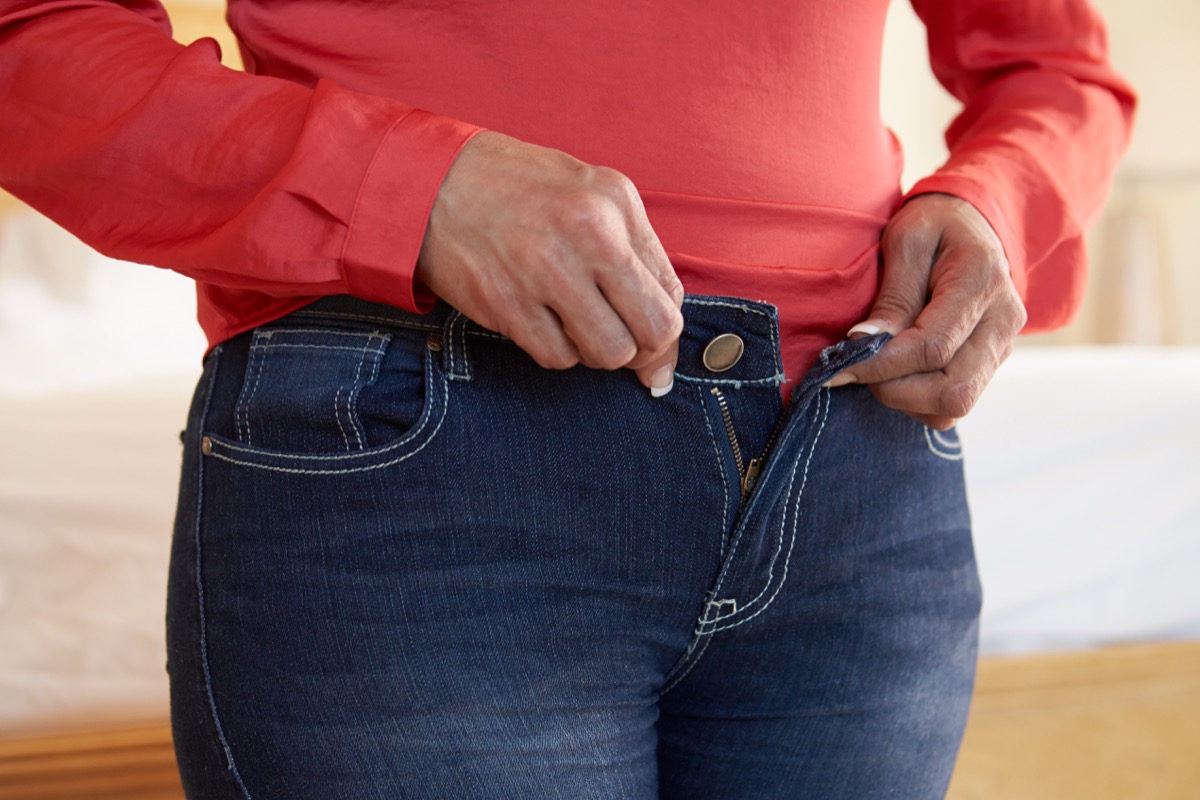 Wearing jeans to work wears away your belly. University of Wisconsin researchers found that people who wore denim to work took almost 500 more steps (about a quarter mile) throughout the day than they did on days when they wore more formal attire. Sure, you may feel more dapper in your suit, but losing extra belly fat is sure to make you see jeans in a different light and feel more confident—no matter what you're wearing. 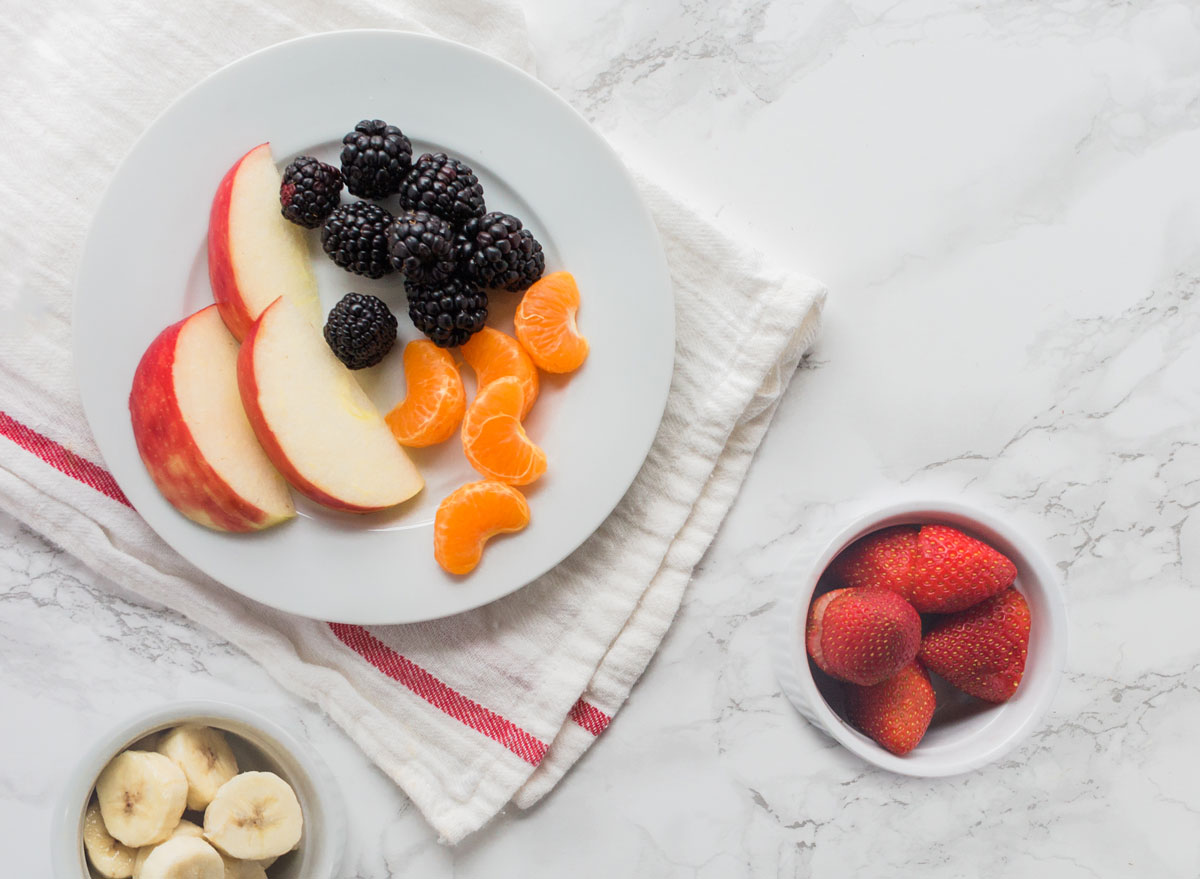 Smelling fresh green apples and bananas curb appetite and make sugary desserts less appealing, studies have shown. The scientists suggest this is because the produce makes you subconsciously think about making healthier choices. If a fruit basket on your desk attracts too many flies, try a simpler idea, like a shea butter-based scented lotion, which will have the same effect. (If you're eating your apple instead of sniffing it, go for the red one.) 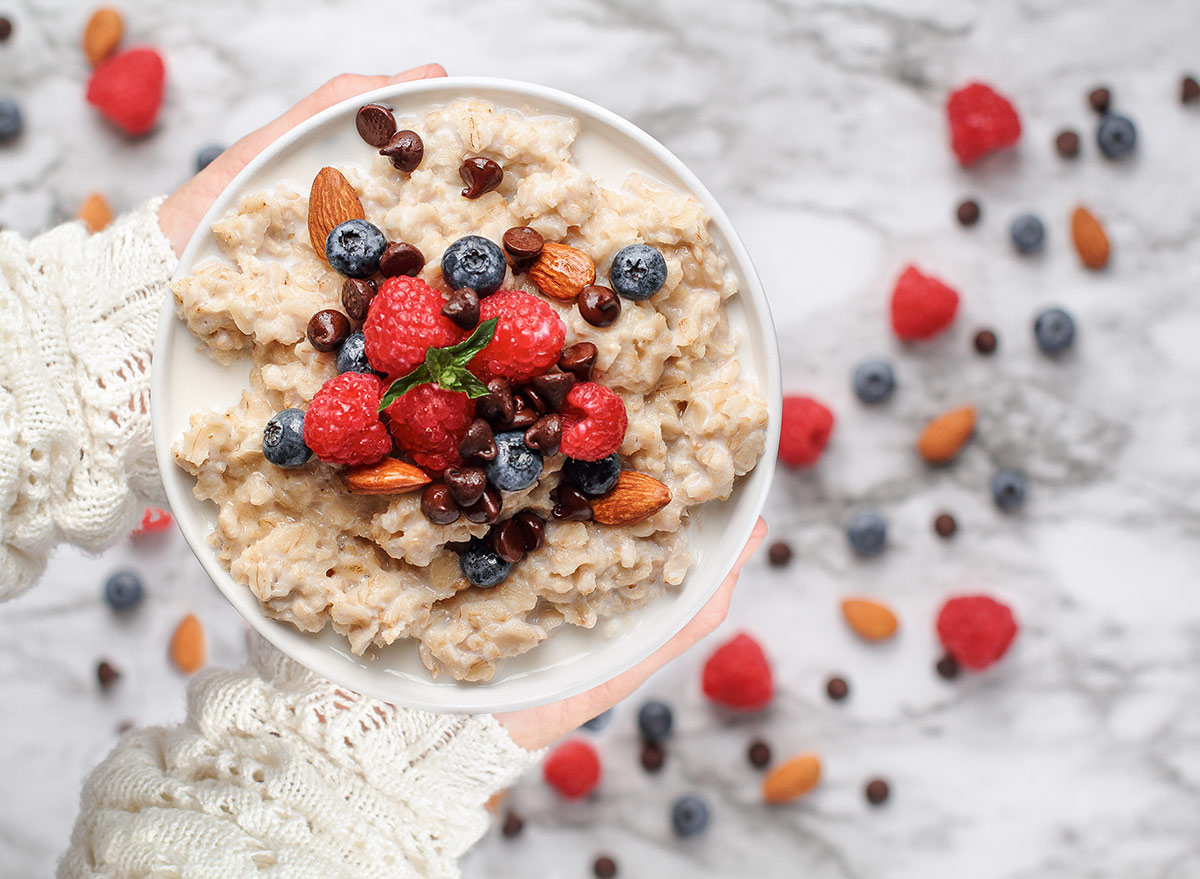 Does your crazy-busy morning routine leave you with little time to do more than scarf down a bowl of cereal before running out the door? If so, put down the spoon and listen up! Research has found that eating oatmeal is more satiating than the cold stuff and can help you slim down. Since the instant varieties aren't always nutritional champions, it's better to use the slow-cooking variety. 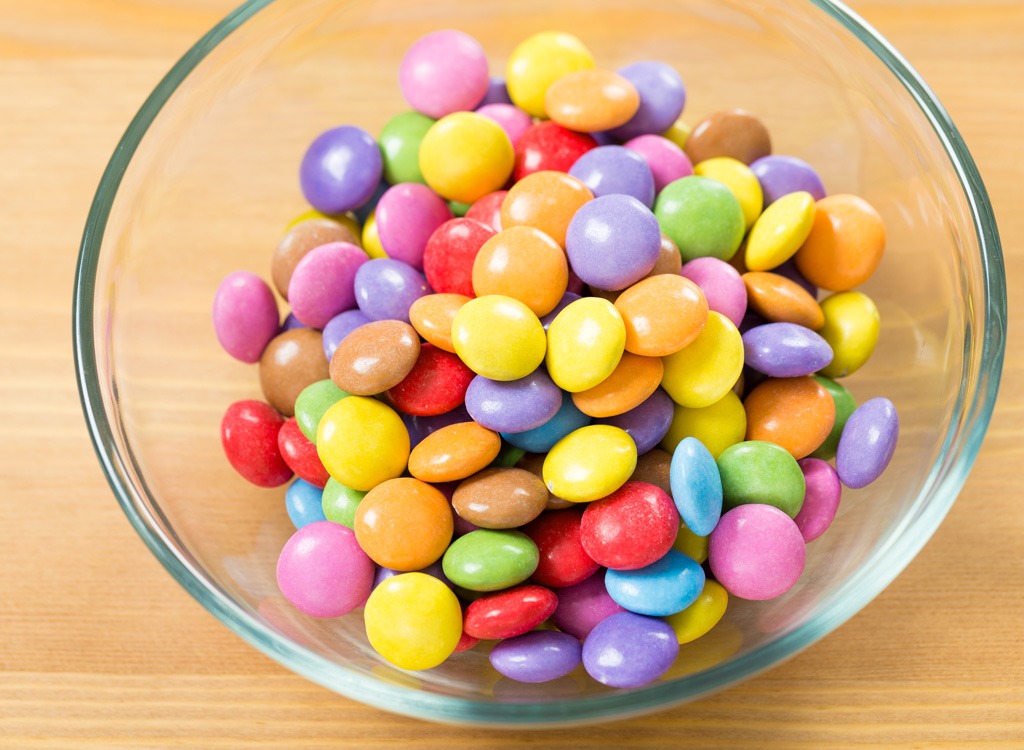 A recent study found that fantasizing about eating an entire packet of your favorite candy before indulging may cause you to eat less of it. For the study, researchers asked participants to imagine eating 3 or 30 M&Ms, and then invited them to help themselves to some of the candies as a "taste test." Those who imagined eating lots of M&Ms actually ate the least. 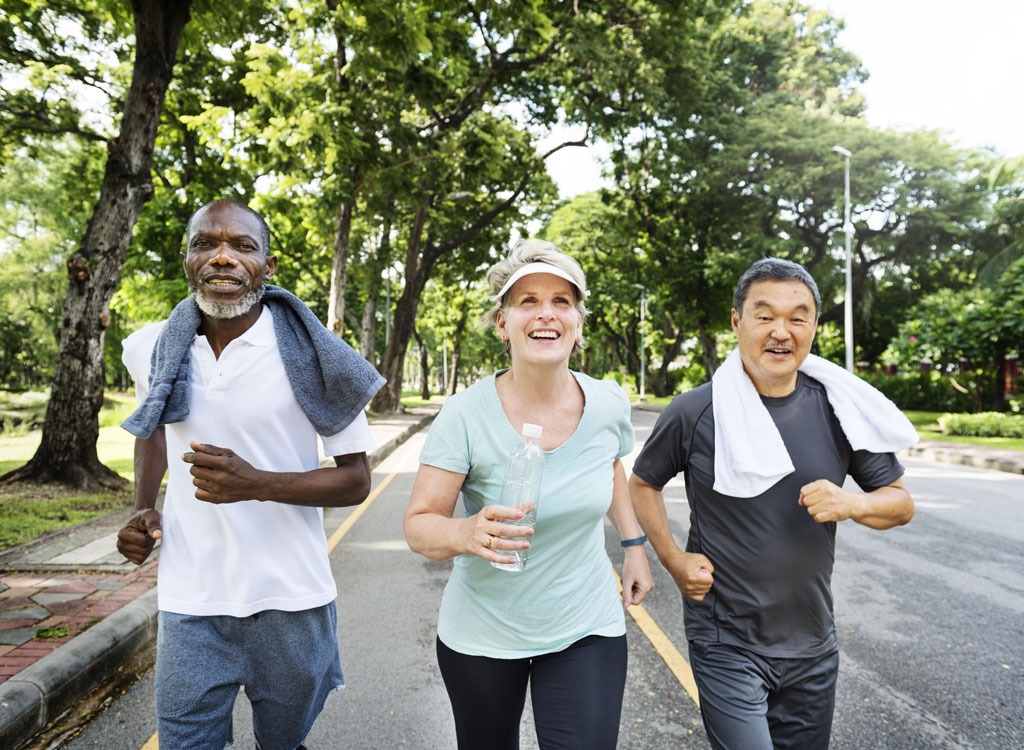 It's hard to squeeze in a workout before meeting friends for drinks, so you blow off . . . the workout, of course. A better idea: Tell your bud to meet you at the gym. You can socialize, get fit, and still hit the bar afterward. This trick works with spouses, too: A recent JAMA Internal Medicine study of nearly 4,000 couples found that people are more likely to stick to healthy habits like exercise when they team up with their partner. 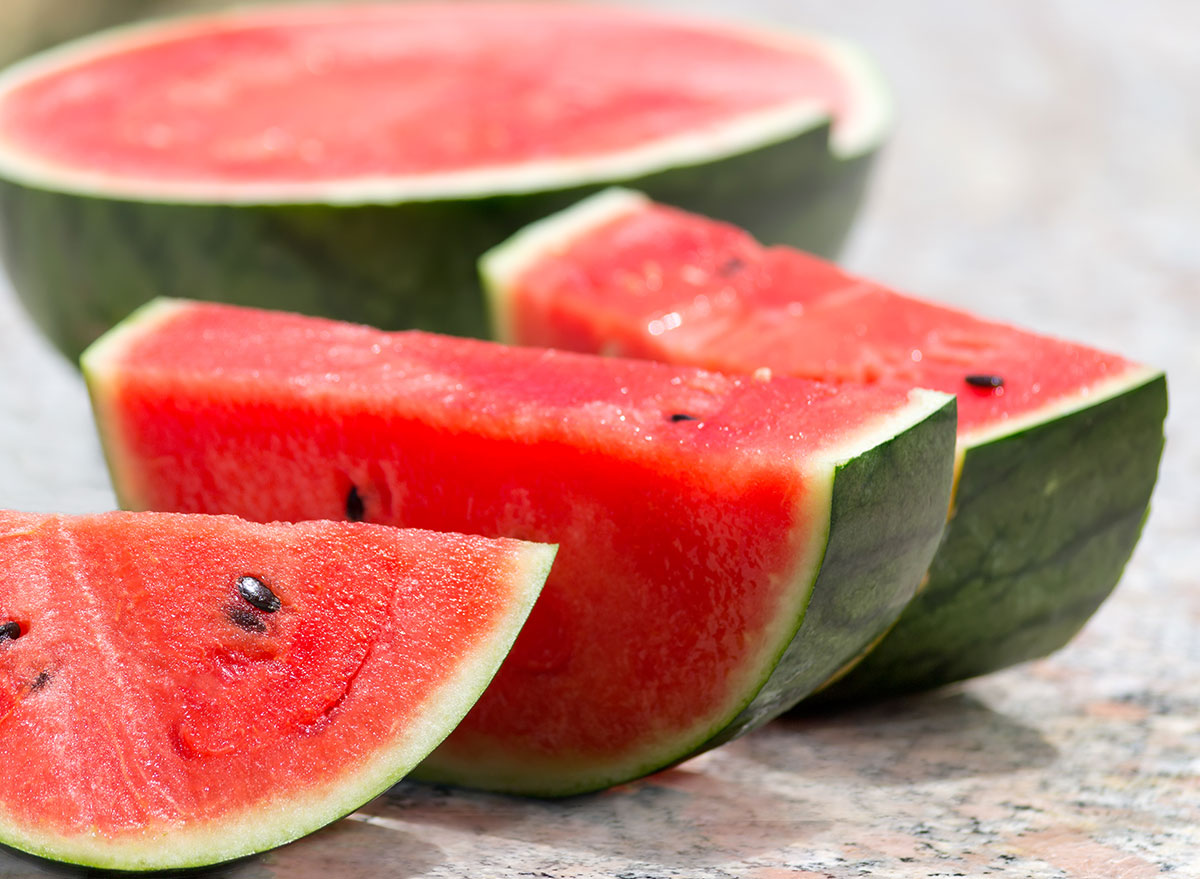 While all fruits are healthy, a handful of them reigns supreme when it comes to frying fat and de-bloating your belly. University of Kentucky researchers found that eating watermelon can lower fat accumulation, while another group of great minds discovered that honeydew can banish water retention and bloating. Spend ten minutes chopping up these slimming fruits for the week ahead. Enjoy them solo as a snack, throw them into yogurt or add them to salads. Watermelon is also one of these 50 Best Foods for Him—in Bed—share them with the man in your life.

While it may sound counterintuitive, eating before going to a work dinner or happy hour can actually take off pounds. A series of studies out of Penn State published in the journal Appetite found that noshing on an apple or a broth-based soup prior to sitting down to a restaurant meal can reduce total calorie intake by 20 percent. With the average restaurant meal weighing in at 1,128 calories, saving 20 percent once a day could help you lose up to 23 pounds this year.

Get Yourself Some Fish Oil 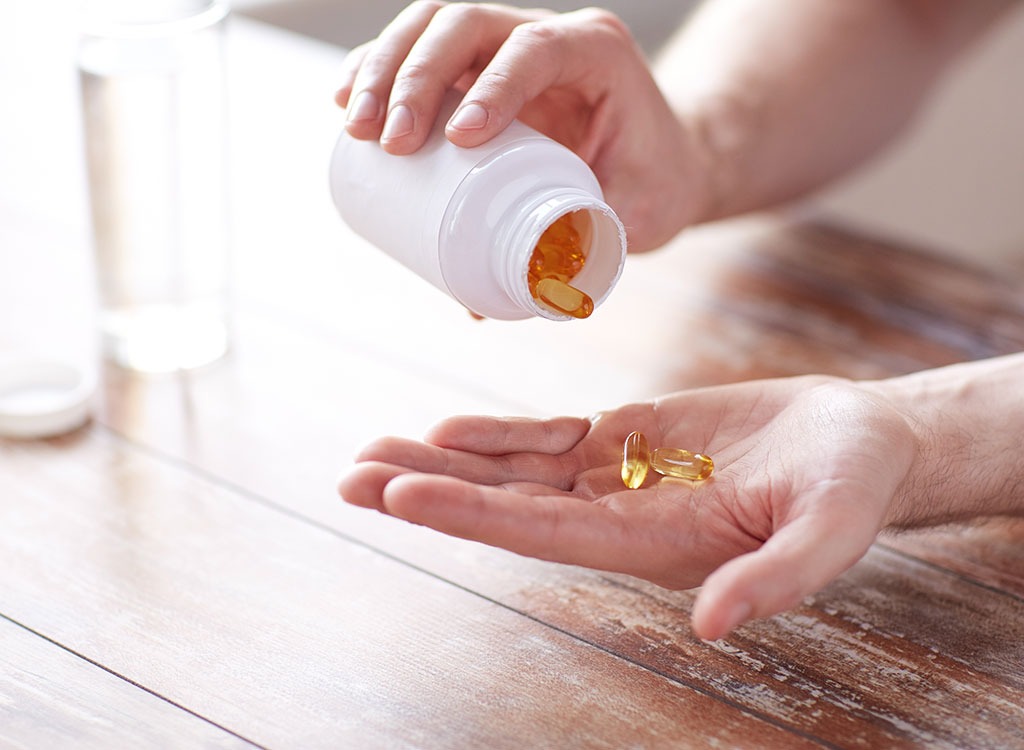 Need a little help jump-starting your weight loss (or fending it off entirely)? Your best bet may be to turn to the sea. It may sound a little unappetizing, but fish oil is one of the best nutrients for the human body. According to NIH, fish oil (which can be consumed by eating fish rich in omega-3 fatty acids such as tuna, salmon, mackerel, and sardines or by taking supplements – whichever fits best into your lifestyle) lowers triglycerides in those with diabetes and heart problems by as much as 20 to 50 percent. That's not all these fish can do for your figure. Research suggests fish oil can also help boost weight loss by helping you feel full, according to a study published in Appetite. 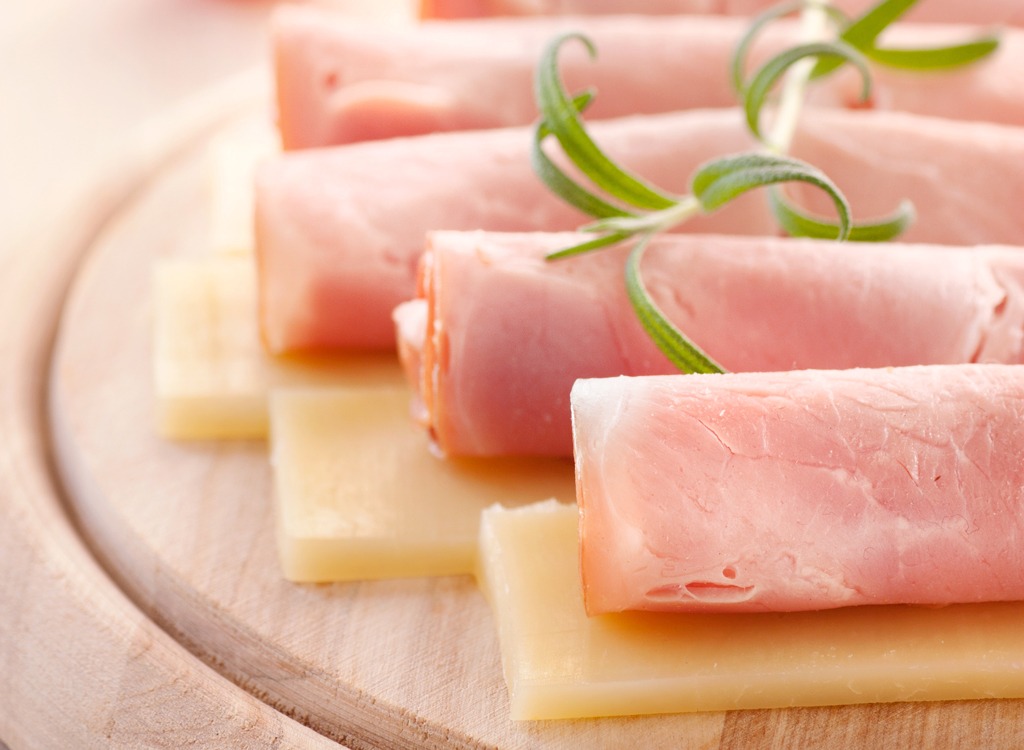 In seconds: Lay a slice of Swiss cheese on a cutting board. Top with a slice of deli turkey and a spoonful of hummus or guacamole. Wrap like a jelly roll and eat. You'll save no fewer than 200 calories compared to your typical lunch. 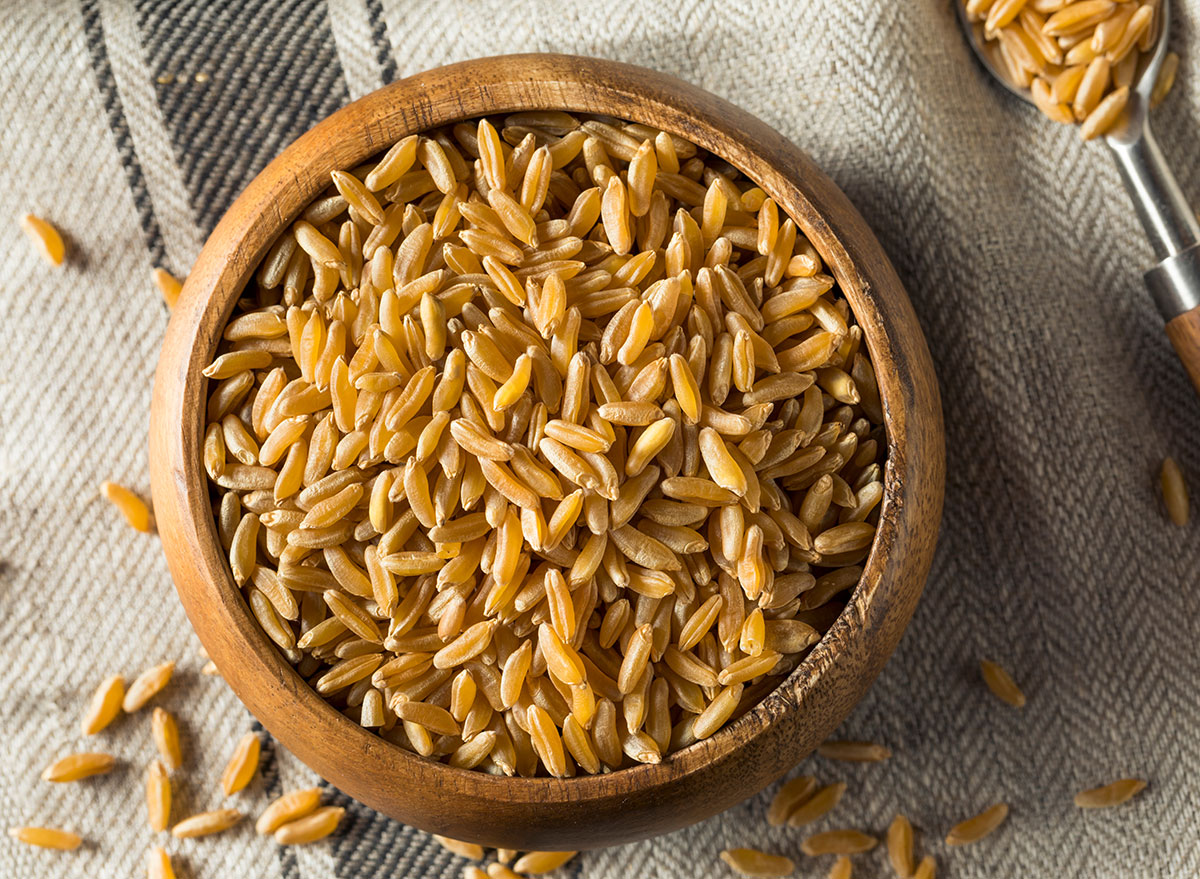 With ancient grains trending, this one will battle quinoa and teff for space at your table. Native to the Middle East, kamut, also known as Khorsan wheat, is rich in heart-healthy omega-3 fatty acids, high in protein and low in calories. A half-cup serving has 30% more protein than regular wheat (six grams), with only 140 calories. Eating kamut reduces cholesterol, blood sugar and cytokines, which cause inflammation throughout the body, a study published in the European Journal of Clinical Nutrition found. Kamut is a good source of zinc, iron, and B-vitamins, all of which will help keep your energy levels high so you can burn more calories throughout the day, aiding your weight-loss efforts. Toss it into salads or eat it as a side dish on its own. A quick tweak like that can have you melting fat fast—along with these secrets on 14 Ways to Lose Your Belly in 14 Days.

The post 15 Underrated Weight Loss Tips That Actually Work appeared first on Eat This Not That.

Read More
Did you miss our previous article...
https://lifestyle.delivery/health-fitness/experts-say-covid-symptoms-require-immediate-attention
weightlosswork