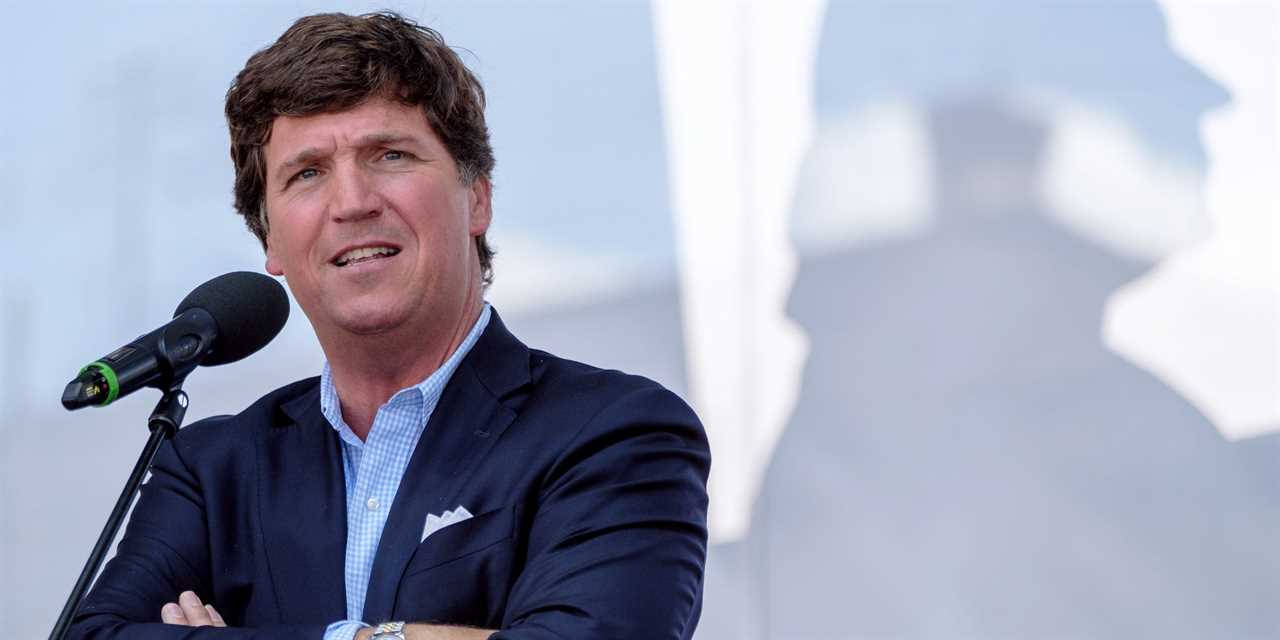 Back in his bowtie days, the idea of young columnist and TV pundit Tucker Carlson arguing in favor of a Russian military invasion and against the position of the US and its NATO allies would have seemed far-fetched.

Yet on Tuesday night, Carlson opened his primetime Fox News show with a segment depicting the US as "weak," siding instead with Russian President Vladimir Putin as the strong and rational actor in the debate over what President Joe Biden should do if Russia invades Ukraine.

Carlson deployed one of his most common tactics, reframing the issue on his terms by starting out with an assumption.

"Here's something all of us need to begin to internalize," Carlson told his roughly 3 million average nightly viewers. "Just because something seems far-fetched or it seems crazy, or it seems totally destructive to core American interests, doesn't mean the US government won't do it. That's the main lesson of the moment we're living in."

Carlson then said there is a good chance of a "hot war" with Russia, arguing that Biden would start a war to salvage his historically low approval ratings; Biden, in fact, said Wednesday he would not deploy US troops to Ukraine.

Going even further, Carlson said NATO only exists "to torment Vladimir Putin," and that the authoritarian leader "just wants to keep his western borders secure."

In reality, Putin has been the aggressor in Ukraine. He seized its territory by force in 2014 and has fueled the war waging in its east, and has referred to citizens of Russia and Ukraine as "one people."

But Carlson's misleading overture to Putin may have deeper roots in his embrace of white authoritarians who present themselves as strong counters to migration and especially Islamic influence.

Fox News did not return Insider's request for comment.

Carlson's take on Ukraine is at odds with reality 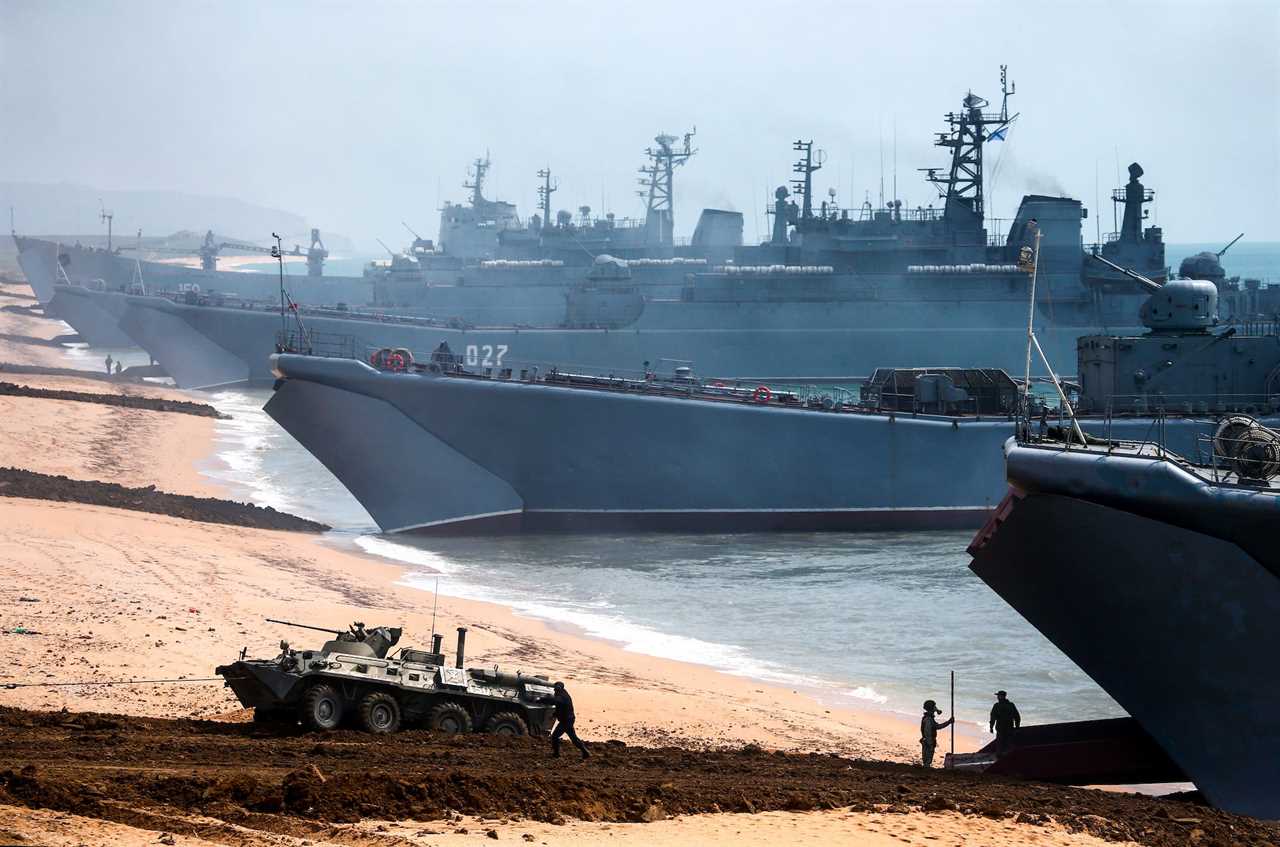 Russian landing ships and military vehicles during an exercise at the Opuk training ground in Crimea, April 22, 2021.

Carlson's misleading presentation completely omitted that Putin's aggression toward Ukraine catalyzed the tensions with NATO that he's now using as a pre-text to deploy over 90,000 troops (potentially up to 175,000 in the coming months) near the border of the former Soviet republic.

"Putin invented this 'crisis' single-handedly," Michael McFaul, the former US ambassador to Russia, said in a tweet on Tuesday. "Nothing changed in Ukraine. Nothing changed regarding NATO policy."

After the pro-Kremlin Ukrainian President Viktor Yanukovych was ousted following mass protests, Putin in March 2014 invaded and annexed Crimea from Ukraine; it's now viewed as occupied Ukrainian territory by the international community. Since that year, Ukrainian forces have been engaged in a war with Kremlin-backed rebels in the eastern Donbass region. The conflict has killed over 13,000 people. Russia claims no involvement in the Donbass war, but the West and Ukraine point to evidence of its sent troops and weapons.

The Kremlin currently claims it has no plans to invade Ukraine, but experts warn that it's a real possibility — particularly given Russia has done so before. Indeed, Putin's seizure of Crimea was quite popular with Russians but a larger invasion may not be if more Russian troops are wounded or killed.

"There is a major risk of Russian military activity in Ukraine in the next few months. All the signs point to a major build up of military capability," Ivo Daalder, the US ambassador to NATO from 2009 to 2013, told Insider last month.

Ukraine is "unfinished business" for Putin, Fiona Hill, who served as the top Russia advisor on the National Security Council under the Trump administration, recently told Insider.  "One way or another, he wants Ukraine neutralized," she added.

The Russian leader views NATO's growing influence in Ukraine as an existential threat, and has warned the alliance against crossing his "red lines" by expanding military infrastructure in the country. But it was his decision to annex Crimea and the Kremlin's support for rebels in the Donbass region that pushed Ukraine closer to NATO in the first place. Ukraine borders a number of NATO countries, and members of the alliance have provided it with security aid — including weapons.

Carlson's skewed commentary on Ukraine also ignores the fact that NATO (including the US) is unlikely to go to war with Russia, even in the event of an invasion. Ukraine has strong ties with NATO, but it's not a member and the alliance is not obligated to come to its defense.

"It is important to distinguish between NATO allies and partner Ukraine," NATO Secretary General Jens Stoltenberg recently said. "NATO allies, there we provide collective defense guarantees,'' Stoltenberg said, while underscoring that "Ukraine is a partner, a highly valued partner."

Along these lines, President Joe Biden on Wednesday said that the US would not unilaterally deploy troops in response to a Russian invasion.

"If Russia does invade, NATO will not take direct military action against Russia," Steven Pifer, the US ambassador to Ukraine from 1998 to 2000, told Insider in late November. "But you will likely see more arms supplies by individual NATO members to Ukraine, and the Alliance as a whole will become even more serious about bolstering its deterrence and defense posture against Russia."

NATO and the US have warned Russia there would be severe economic consequences if it invades Ukraine, but have not made threats of war.

Carlson also did not touch on the fact that Putin, a former KGB operative, is a ruthless authoritarian who is widely regarded as one of the biggest foes to democracy in the world. Putin does not tolerate any opposition to his rule — the Russian leader's critics often end up dead or imprisoned — and wants to eradicate Western influence in Ukraine.

"The key problem is that Russia denies Ukraine any agency," Orysia Lutsevych, a research fellow and manager of the Ukraine forum in the Russia and Eurasia programme at Chatham House, told the Guardian. "They genuinely believe that Ukraine is a kind of puppet state … That's why I believe the situation is so dangerous because Putin is demanding something that Biden cannot give." 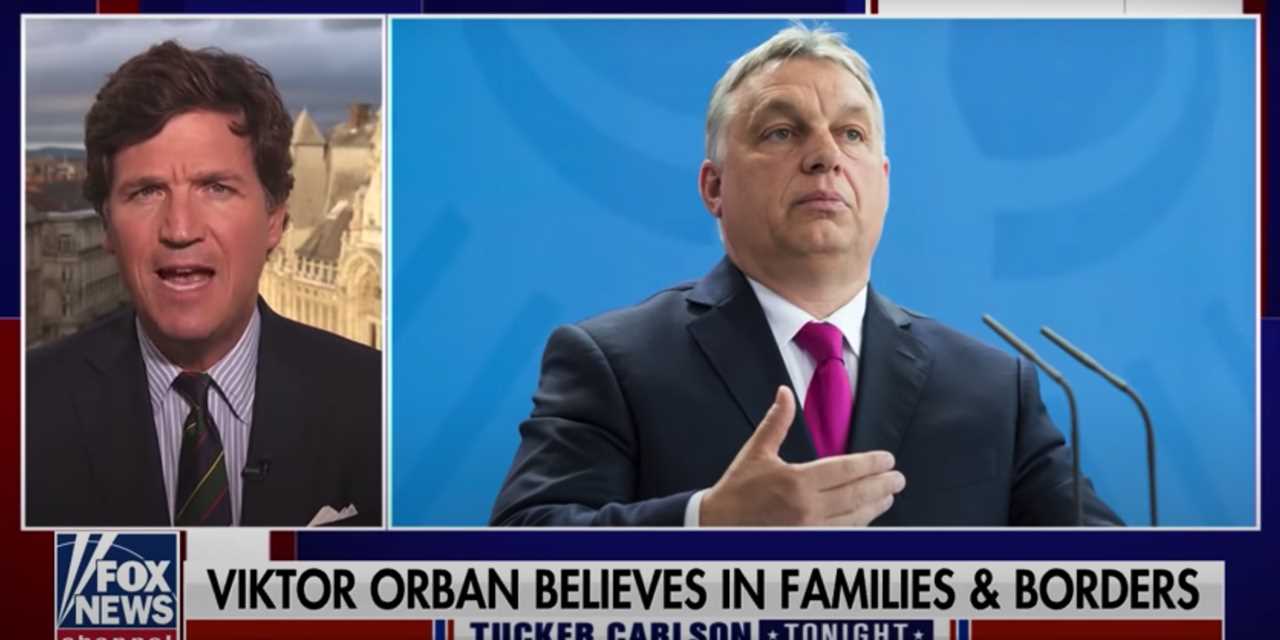 Tucker Carlson is broadcasting from Hungary and praising the country's autocratic leader.

For some of the global far-right, Putin seems a natural ally. He's the head of a nation that is predominantly Christian, and a white leader who has ruthlessly fought Islamic militants and promoted himself as an ally in this effort. He even likes to appear at motorcycle rallies with a hyper-nationalist biker gang.

Carlson's defense of Putin is in line with this trend.

And in reaching such an outlier position for an American cable TV host, Carlson arrived at his pro-Russia stance not by accident, but by following through to the logical conclusion of his years-long embrace of authoritarian regimes.

He went to Hungary over the summer to tout Hungarian Prime Minister Viktor Orbán — an authoritarian leader who has enacted harsh xenophobic and anti-LGBT policies in recent years — as an effective model for the Trump movement to emulate.

Carlson has also cultivated a relationship with the president of El Salvador, Nayib Bukele, another authoritarian leader who has described himself as the "Dictator of El Salvador" and "the world's coolest dictator." For his FOX Nation streaming show "Tucker Carlson Originals," he traveled to El Salvador to sit with Bukele for an interview and promoted it on his primetime show.

Much of this shift in Carlson's politics took place during the tumultuous years of the Trump administration, but it didn't come out of nowhere.

By: [email protected] (Jake Lahut,John Haltiwanger)
Title: Tucker Carlson justifying an invasion of Ukraine is where he has been heading all along
Sourced From: www.businessinsider.com/tucker-carlson-russia-ukraine-border-comments-backstory-fox-news-2021-12
Published Date: Wed, 08 Dec 2021 22:14:40 +0000