Which purchases are eligible for elite Marriott Ambassador status?

Editor’s note: This post has been updated with new information. It was originally published in 2019. While revenue requirements are now commonplace..

Editor’s note: This post has been updated with new information. It was originally published in 2019.

While revenue requirements are now commonplace when it comes to earning airline elite status, you can still earn most levels of hotel elite status without ever spending a dime, especially since award nights count towards elite qualification in some cases.

The most notable exception to this would be Marriott’s top-tier Ambassador elite status, which usually requires 100 nights and $20,000 of spending each year to earn. As a refresher, this was reduced to $14,000 in 2021 but returned to the standard $20,000 threshold for 2022.

Get the latest points, miles and travel news by signing up for TPG’s free daily newsletter.

TPG reader Madeleine wants to know what charges count towards that $20,000 requirement …

We are currently staying at the St. Regis Langkawi and are just $2,000 short of qualifying for Marriott Bonvoy Ambassador status. The room was paid for on points, but our tours and transportation were charged directly to the room. Will this spending count towards Ambassador status?

Marriott’s Ambassador status is a serious step up from the next rung, Titanium, which requires 75 nights a year and no set spending amount.

Ambassador elites enjoy nearly all of the same perks as Titanium elites — including a 75% points bonus, suite upgrades, free breakfast as an option at most brands, and more — but the biggest differentiator is in the name itself. Ambassador elites get access to a dedicated Marriott ambassador team to coordinate all their travel, including notifying hotels of arrival and departure times and any special requests or special events like birthdays or anniversaries that are being celebrated.

If something goes wrong, like points not posting correctly to your account, the ambassadors can help sort it out so you don’t have to wait on hold.

Sadly the ambassador program has been watered down, as we reported last year. The service no longer comes with a personal ambassador, though it may still be worth it for some readers.

Related: What is Marriott Bonvoy elite status worth?

$20,000 is a lot of money to spend each year, especially if you frequently use points to stay for free. As a point of comparison, when I originally wrote this article, I was sitting at 74 nights in 2019, and just under $15,000 spent, though nearly a third of that came from one very expensive trip to the Maldives in February of that year. 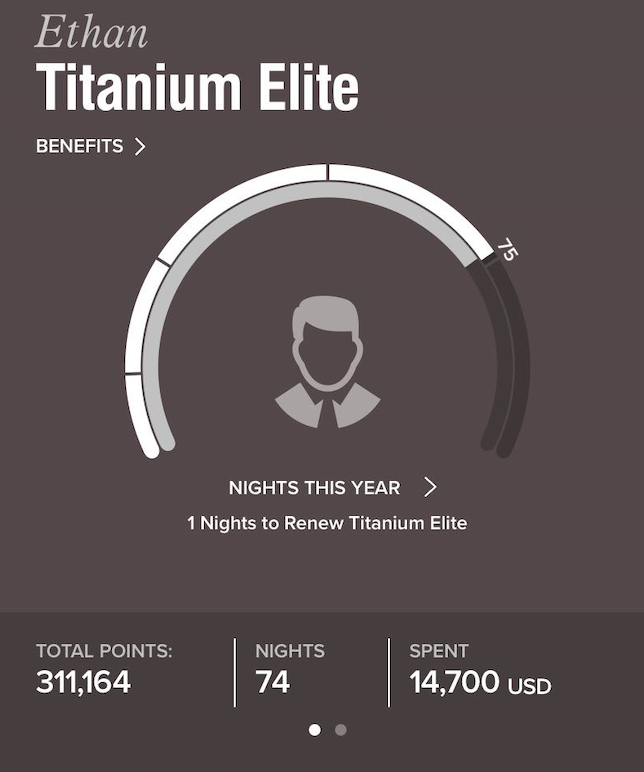 That’s a pretty high mark to reach, so it’s important to make sure every dollar counts the way you expect it to. Here’s what the terms and conditions of the Marriott Bonvoy program say about Ambassador status:

“Marriott Bonvoy® Ambassador Elite Status is earned when a Member has both 100 Qualifying Nights annually and $20,000 USD in annual qualified spending”

Unfortunately, this doesn’t quite answer Madeleine’s question, but the “qualified spending” piece is important as it tells us that if you eat at a restaurant at a Marriott property or grab drinks at the bar when you aren’t staying at the hotel, that spending likely won’t count. Meanwhile, Marriott defines the following as qualifying charges:

“Qualifying Charges for Participating Properties include Qualifying Rates for Stays, Food and Beverage, and in-room phone/movies/video games. They do not include on-property charges earned without a hotel Stay, Marriott Bonvoy® Events, Cobrand credit card spend, and other Non-Qualifying Charges.”

There are a few other specific examples, including a section noting that hotel restaurants are bars may count your spending towards Ambassador status even if you aren’t staying at the property, but you can generally think of the main categories as room rates, food and drink at the property, and other in-room purchases like movie orders.

The next section includes a catch-all list of non-qualifying charges, that essentially includes anything not listed as qualifying charges. TPG Lounge readers were quick to point out that third-party tours and airport transfers, like the ones Madeleine asked about, rarely count towards Ambassador status. There’s no shortcut to her spending, but if she and her family are actually spending 100 nights or more in Marriott properties every year, it might be worth splurging on a couple of fancy dinners (which shouldn’t be that hard to do at a stunning St. Regis property) to make sure they lock in Ambassador status for the next year.

The value of Marriott’s Ambassador status seems to vary heavily based on the individual ambassador assigned to you at each time. While some people are underwhelmed by the service, those with good ambassadors in the past have sworn by it. Unfortunately, Madeleine wasn’t able to qualify by spending on third-party tours and airport transfers, so if she wanted to enjoy Ambassador perks she would have needed to consider indulging in a few pricey meals and drinks during her stay.

Thanks for the question, Madeleine, and if you’re a TPG reader who’d like us to answer a question of your own, tweet us at @thepointsguy, message us on Facebook or email us at [email protected]thepointsguy.com.